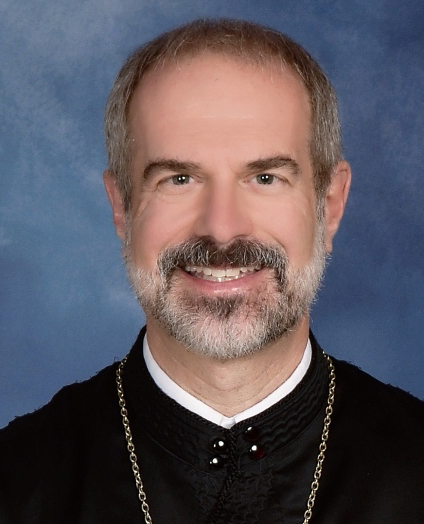 Fr. Michael Courey has served as the pastor of St. Katherine since 1997. He and his wife, Presbytera Maria, are the parents of four adult children. Fr. Michael holds degrees from The College of Wooster (B.A. Studio Art), Holy Cross Greek Orthodox School of Theology (Master of Divinity), and Fuller Theological Seminary (Doctor of Ministry). His post-graduate work has been focused in the area of Orthodox Christian Spirituality.

Fr. Michael is the author and illustrator of Walk in the Light: Spiritual Exercises in Great Lent for Young Adults. As a visual artist, iconographer, and symposia speaker, he has presented lectures, workshops, and retreats at Loyola Marymount University, the Getty Center and Getty Villa, and Mary & Joseph and St. Nicholas Retreat Centers. Recently, Fr. Michael completed eight icons for the iconostasis for St. Basil Greek Orthodox Church in San Juan Capistrano. His pastoral reflection, Sources of Inspiration for the Contemporary Iconographer, was published in a collection of essays entitled Icons and The Liturgy, East and West: History, Theology, and Culture edited by Rev. Dr. Nicholas Denysenko (Notre Dame Press, 2017). Currently, Fr. Michael serves on the Advisory Board of the Huffington Ecumenical Institute at Loyola Marymount University. To view selections of his art and iconography, visit www.michaelcourey.com 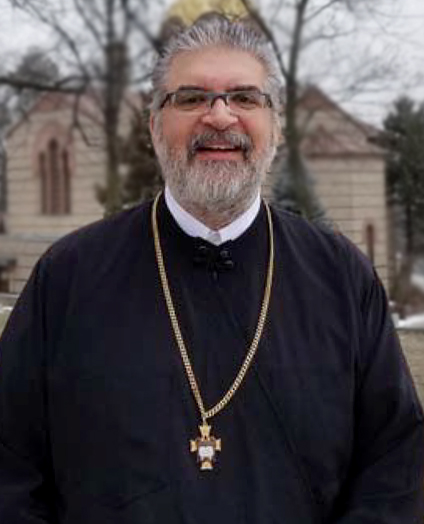 Father Peter grew up in Sacramento, California, where his father, the late Father Demetrius Dogias, served as the Proistamenos of Annunciation Greek Orthodox Church for many years. Father Peter’s mother and family still live in the Sacramento area. Father Peter completed his undergraduate studies at Hellenic College, and just graduated from Holy Cross Greek Orthodox School of Theology on May 18, 2019. He was ordained to the Holy Diaconate and Holy Priesthood earlier this year on March 9 – 10, 2019 at the Annunciation Church in Sacramento, and has gained valuable liturgical experience during his last semester of studies at Holy Cross.

While Father Peter was completing his undergraduate studies at Hellenic College he met his wife, Presvytera Dimitra (Alexopoulos), who was also studying at Hellenic College. While students, Father and Presvytera were beloved by their schoolmates and faculty alike as they are both true servants of the Lord. They share a great love of our faith and culture with our entire community. Prior to his theological studies, Father Peter worked both in the real estate and restaurant industries. Father and Presvytera are the proud parents of their daughter, Varvara.

The Biblical term Deacon has the meaning of a servant in New Testament Greek. Simply put, the role of a deacon is one who offers service to the people of God in His holy church. The office carries with it not simply a liturgical part in the holy services, but a life of dedication and devotion to offering a ministry of service to the most vulnerable members of the community: the shut-ins in their homes; those in the hospitals and nursing homes; widows and children; and especially caring for the poor.
In March of 2000, Cary Constantine was hired as a layman and served as our Parish Administrator. Cary took on many responsibilities in this role which included: creating the office volunteer ministry, managing the day-to-day preparations and operations of the Greek Festival, assisting Father Michael with sacraments and services, and working with youth ministry program. On May 2, 2004, here at St. Katherine, Cary was ordained to the Holy Diaconate! The newly ordained Deacon Cary (Kyriakos) continued to serve the church full time as the Parish Administrator, and part-time as a volunteer clergyman. In 2010, based on his record of dedication and devotion to serve our people with dignity and care, His Eminence Metropolitan Gerasimos, approve the recommendation that Rev. Deacon Cary be promoted to serve as Father Michael's Pastoral Assistant. This meant that Deacon would serve as a full time minister holding the office of the diaconate, and his job description changed from primarily administrative work to full time pastoral ministry.
.